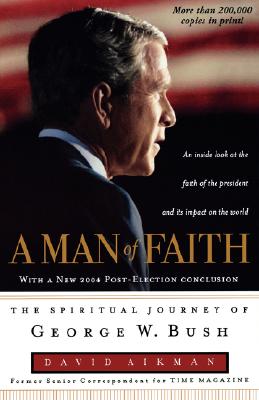 Man of Faith : The Spiritual Journey of George W. Bush

Book is in good readable condition. Has previous owner's inscription inside front cover. Slight rubbing and bumping damage to corners and edges. Cover shows some scuffing. This book ships in padded mailer via USPS.

More than any other world leader in recent times, George W. Bush is a man of faith...a conservative Christian who has brought the power of prayer and the search for God's will into the Oval Office. His faith has proven to be a bedrock of strength and resolve during two of the most tumultuous years in our nation's history. According to Newsweek magazine, "This presidency is the most resolutely faith based in modern times. An enterprise founded, supported and guided by trust in the temporal and spiritual power of God." David Aikman, skilled journalist and former senior correspondent for TIME magazine, pens this dramatic and gripping account of Bush's journey to faith. Based on interviews and behind-the-scenes stories, you'll learn how...

A Man of Faith...an intimate look at how Bush's spiritual life has impacted his presidency, the nation, and the world.

Man of Faith : The Spiritual Journey of George W. Bush