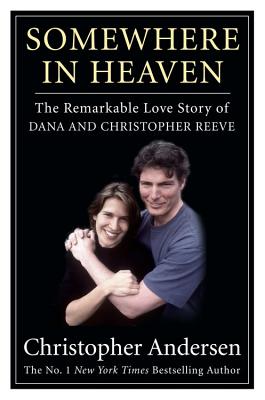 Somewhere in Heaven: The Remarkable Love Story of Dana and Christopher Reeve

"Dana is my life force."
--Christopher Reeve "A terrible thing happened. I wish it hadn't. But would I change who I married. . . . Never."
--Dana Reeve He was a hero in every sense of the word--the chiseled-from-granite star of four blockbuster Superman films and the romantic classic Somewhere in Time who, after being paralyzed in a freak horseback riding accident, became a symbol of hope for millions. Dana Reeve was no less heroic, standing steadfastly by her husband's side until his surprisingly sudden and unexpected death at age fifty-two. When Dana, a non-smoker, passed away from lung cancer just seventeen months after Chris's death, she left behind their thirteen-year-old son, Will, to be raised by friends and family. Dana was only forty-four years old. That fate could have dealt such a cruel hand to this golden couple seemed unfathomable. That they could endure it all with grace, courage, and humor defied belief. Yet for all the millions of words that have been written about their public causes and private struggles following Chris's accident, little is known about the lives they led as passionate young lovers. Now, in the manner of his poignant-yet-stirring bestsellers Jack and Jackie, Jackie After Jack, An Affair to Remember, The Day Diana Died, After Diana, and The Day John Died, No. l New York Times bestselling author Christopher Andersen draws on those who knew them best to examine in touching detail the Reeves' unique partnership and the romance, faith, and fortitude that defined it. Sometimes heartbreaking, often uplifting, always compelling, Somewhere in Heaven is more than just a portrait of a marriage. It is the profoundly human story of two souls whose brief lives made a difference, a bittersweet saga of tragedy, triumph, and loss, and--above all else--a love story for the ages.

Title: Somewhere in Heaven: The Remarkable Love Story of Dana and Christopher Reeve

Somewhere in Heaven: The Remarkable Love Story of Dana and Christopher Reeve